How to Negotiate Past Your Fear

What if your fears were really fear of your power? What if at their root, your fears were you shrinking away from the full force of that power? As Marianne Williamson said (even though her brilliant quote is often mis-credited to Martin Luther King):

“Our greatest fear is not that we are inadequate but that we are powerful beyond measure. It is our light, not our darkness, that brightens us. We ask ourselves ‘who am I to be brilliant, gorgeous, handsome, talented and fabulous?’ Actually who are you not to be? … Your playing small does not serve the world. There is nothing enlightened about shrinking so that other people won’t feel insecure around you.”

I’ve talked about the fact that all of life is a negotiation and so learning the art of negotiation may be the most important skill you ever master. I’ve talked about the fact that you first need to master the ability to negotiate with yourself. An integral element of that negotiation process is recognizing your fear for what it is. Knowing that you will not get rid of fear, or overcome it per se, but rather that you can learn to act in the face of your fear and use it as fuel to propel you to your next level.

What if you reframed your fear and used it as a source of empowerment? Let me use my recent pole climb as an example and metaphor for how you can negotiate past your fears. In Fiji this week, I was challenged to climb a (seemingly) never-ending pole that burst up into sky above our heads, as we craned our necks, contemplated the sheer madness of the venture. It didn’t help that the winds were howling, and the pole visibly swayed side to side under the force.

I consider myself the adventurous type and don’t usually like to admit to fear, but I confess I was anxious. The queasiness in my gut attested to that. It wasn’t a fear of heights or even a fear of falling. For me, the greater fear (I thought) was fear of failure. Fear of embarrassment. What if I couldn’t pull myself up when I got to the top? What if I was the only one who couldn’t do it? What if I froze in front of everyone as they cheered me on and I couldn’t deliver? I started to invoke visualization techniques – to picture myself scaling up the spikes and staples with ease and standing strong and proud at the top of the pole. But then I thought, what if I made my desired outcome or purpose to climb without worrying about whether I’d succeed or not. To climb for the satisfaction in trying. To define success as the simple act of doing it, whether I made it to the top or not. And then I had an even more radical thought. What if my believed fear of failing wasn’t that at all, but something deeper. What if at some level I was afraid of my own strength and power?

Those reframes took the angst away. Losing the stories empowered me to trust in my infinite potential. Giving in to our fear paralyzes us from taking action. Confronting those fears head on and immediately is an important first step. Get in touch with them – raise your awareness. Name them. Then get curious – dig deeper to find your real source of fear, the root of the purported fear. Reframe it. Then move toward the fear, step into it, embrace it. Know your goal. Know your why. Breathe deeply. Get centered on the now. Find gratitude for whatever opportunity you’re offered and facing. Then just do it. Take action. Release control of the outcome and surrender to whatever will be. Focus on the next step as you move toward your goals. As soon as you do, the fears start to lose power. The reality doesn’t match your worst case scenario imaginings.

For my climb, I knew my goal (as crazy it may be) – to climb that pole and somehow pull myself up to balance on top of that dinner-plate-sized shaky circle. I named my fear – fear of failure and embarrassment. Then I raised my awareness, got curious and dug deeper to uncover the real root of my fears, which allowed me to reframe it. That reframe empowered me to take action. And then I climbed, spike by spike, and staple by staple, planting my foot, pulling myself up, just focusing on the next step. And then the next. Taking a breath will each hoist.

When I got to the top, perched awkwardly like a gangly stork on the top pegs, uncertain how to manoeuvre from that aerial squatting position to somehow getting a foot on top of the small circle and pressing up to stand to full height, I drew on the strength of the sisters below, shouting encouragement, reminding me of my strength, telling me I was unstoppable. Again, reframing (or maybe just recognizing) that the audience I so feared was in fact a source of power, took me to the top, where I stood on strong legs with arms outspread, taking in the bird’s eye view from on high. So here’s to you employing these simple tactics when you face your next fear. Enjoy the view from wherever that may be for you! 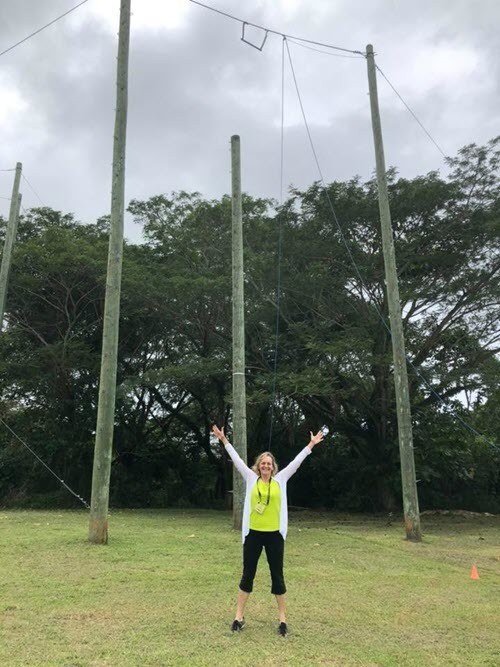